Can you spot what is wrong with these vegetables?  Neither could we!

Our survey and the first short term exchange of students in Schagen clearly showed that our students are very interested in food waste. So we looked for opportunities to involve this topic in our curriculum. Workshops, discussions, poster series, flyers and presentations are the results. Both students and teachers learned a lot and started to think about the way we waste precious food.

Hopefully lessons like this and our campaigns will help to reduce the amount of wasted food in the future. Below you can see a summary a our various lessons and actions about the topic in Austria, the Netherlands and the UK. "Stop Food Waste" is one of our interdependent cooperations including staff and students in all three schools.

You can also download more information about food waste from our ETHICS PORTFOLIO.

In our three wastecooking sessions in June 2016 we cooked menus with donated food that would have been thrown away... Three classes cooked a three course menu from donated food. Elke Schlederer-Oberhauser from nonprofit association "Best of the Rest" visits schools not only to prepare delicious meals but also to raise awareness and illustrate the impact of food waste. We also understood that everyone can make a difference! It´s about the way you think and act when you go shopping or when you are preparing your meals. When you look at the food in the pictures below you wouldn´s believe it was about to be thrown away! You can see newspaper articles about our cooking sessions in our NEWS. And all three schools have decided to continue our work on this topic in 2017! 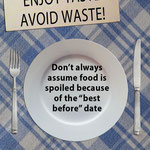 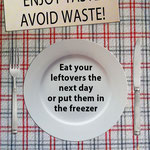 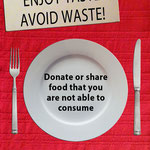 Alongside our Green Canteen and Water Campaing our students have been researching the sustainability of food. They looked into the school canteen to see what their source is for the food they buy so easily during their break time.

In a rapid pace they found documentaries like ‘cowspiracy’ on Netflix and all kinds of posters on the uses of water and grain to produce meat all around the world. They were especially startled with the finding of the amount of agricultural space beeing used NOT to feed humans, but to feed the animals that will end up on their plates.

On this subject the students have created a poster wall in our school te draw attention to the subject and to make other (younger) students aware of what is going on in the world. The most beautiful thing to see in this wall is that is seems to be alive; student are adding posters all the time without being asked or told to do so.

During the projects the students got divided into two camps. One camp started focussing on the production of food, whereas the other camp has focussed on the waste of food. Because this too was  baffling the students, the posters they made (and found on the internet) are imbedded in this poster wall as well.

This project has been funded with support from the European Commission. This publication reflects the views only of the author, and the Commission cannot be held responsible for any use which may be made of the information contained therein.